tbf Scaffolding assists with redevelopment of the Corpus Christi College in Cambridge. 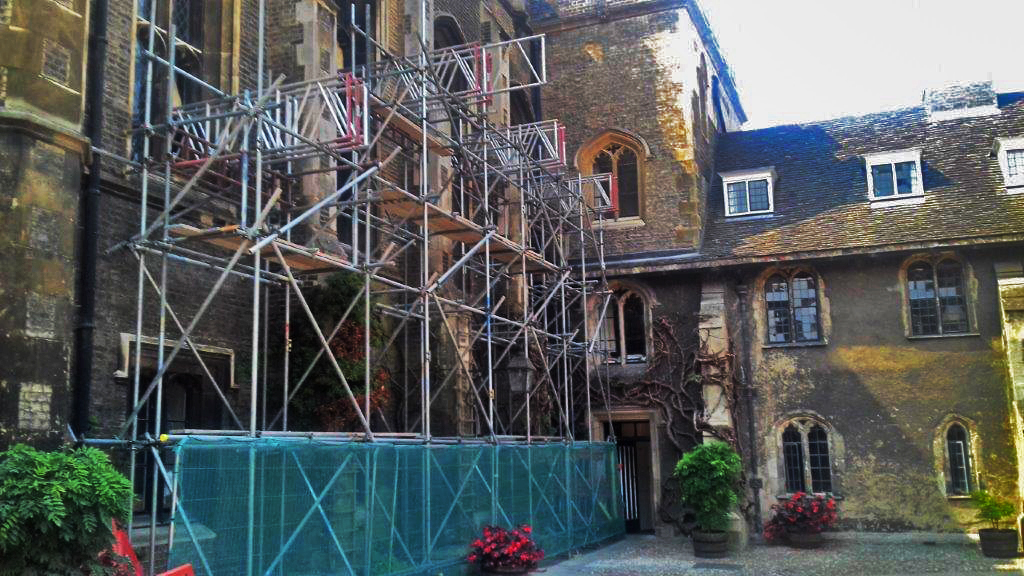 At tbf Scaffolding we are adept at taking on work that brings challenges and unique opportunities. After a competitive tender process, Barnes Construction chose tbf Scaffolding to assist with their redevelopment of the prominent Corpus Christi College in Cambridge.

The College underwent major renovations and restorations from 2017-19. The works had dual purpose: to rearrange and upgrade catering facilities, and to recover and restore some of the medieval and 19th Century details that were covered or altered over the years.

Access presented an immediate problem. The only entrance to the site was through a small door in a 3m high boundary wall. Eventually the wall was temporarily removed, with Historic England’s approval. It was later rebuilt with the same bricks. Both jobs needed scaffold that abutted the narrow street.

Old Court and New Court meet at a stairhall connecting the ground floor old hall (which became the kitchens and now includes a servery on the mezzanine level) and the new Dining Hall, which is on the first floor. This alignment is tricky and caused a couple of centuries’ inconvenience. The mezzanine and bridge installed in 1949 made transporting food from kitchen to Dining Hall easier, but obstructed Wilkins’ elegant design.

Restoration works in the stairhall involved cutting back the mezzanine level and removing a dividing wall within the stairhall. One scaffold frame kept a chalk wall steady while experts injected resin and cut a new doorway.

The kitchen was also renovated, uncovering and restoring medieval details.

The work in the older buildings was complex due to the age of the original structure, and to the many alterations made over 650 years. It required many small scaffolding structures and close communication between everyone involved in the project.

The 19th Century Dining Hall is a Gothic revival building with an intricately painted vaulted ceiling. Redecoration required scaffold and platforms for the expert refinishers.

The Hall’s wooden flooring would not have been suitable for scaffold, so we built a floating platform with external supports. This meant scaffolding had to go through the windows – a solution that created its own set of challenges. Our client brought in a specialist in lead windows. They removed the glass in a couple of window sections, allowing us to carefully feed scaffold through.